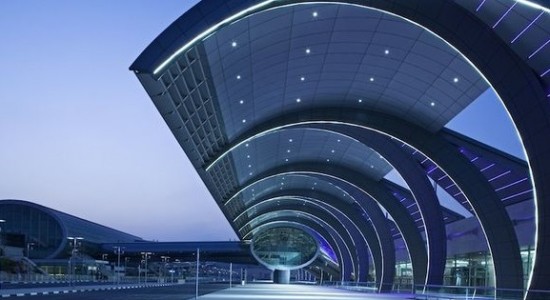 This renowned hotel, which soars 1,053 ft. over the Persian Gulf, on a man-made island just off Jumeirah Beach, epitomises Dubai’s kitschy over-the-topness. Though the property, which was completed in 1999, is ancient by local standards, guests still stop to gaze at the self-professed “seven star” hotel’s six hundred foot high atrium upon first entering. Many do so after arriving via helicopter or their chauffeur-driven Rolls Royce Silver Seraph limos! Its 202 massive suites (which start at 1,830 square feet and reach 8,396 square ft.), are all bi-level, with floor to ceiling glass windows, devoted butler service, private bars, fully equipped offices and offer sublime elegance throughout; with windows, furniture and bed-linens, upholstered in opulent velvet, silks and satins. The expansive bathroooms are filled with full size Hermes toiletries, as well as other little treats like La Prairie night cream and aromatherapy “sleep spray,” arriving in guest’s suites nightly.

The hotel’s frequently used areas are equally excessive: with around the six restaurants. The Al Mahara, which serves gastronomic high-end sea food, is created to look as if it was under water, with a huge aquarium along with a dining room accessible via a simulated submarine ride by means of the hotel’s lobby.

Insider Tip: Splurge out on a helicopter excursion over Dubai, leaving from the hotels exclusive 28th floor helipad.

The Room to Book: The Club Suite, at approximately 3,500 sq. ft., isn’t the largest here, although it does, however, possess both desert and sea views, a good choice, for gazing from both your dining-room and snooker table!

The extremely cutting-edge Faimont Dubai, centrally located within an enormous multi-use complex and attached to the Dubai International Convention Centre by means of a walkway, is located in the centre of the city’s financial district. Although it is generally business types who choose to stay here, a great deal of relaxation can also be found on the menu. The hotel is sprawled over the 10th to the 34th floors, and the hotel is modelled to resemble a barajeel or Arabic wind-tunnel. The 394 guest rooms are dressed in natural tones of terracotta and sand, accompanied by tiled floors and Danish modern-day style furnishings; all are blessed with lofty picturesque views through vast windows. To indulge yourself, choose a room belonging to the exclusive Fairmont Gold portion of the hotel, which can be found on floors 30 and 32. All of these provide you with a 24-hour butler service, a private checkout area and special lounge access, and provide some relief against the chaotic enveloping neighbourhood.

Insider Tip: The Fairmont’s aptly named restaurant -The Spectrum on One, which serves food from Thailand, Japan, India, China and the Middle East, popularized the ubiquitous “champagne brunch” in Dubai.

Held here, every Friday, this is a great way to rub shoulders with the locals, and to sip Moet & Chandon champagne.

The Room to Book: A Fairmont Gold suite on the 32nd floor boasts close proximity to a lounge serving authentic Arabian buffet breakfasts every morning, tea, cakes and sweets in the afternoon, and hors d’oeuvres, wine and champagne during the evenings.

Kempinski Hotel, Mall of the Emirates

Found in the centre of so-called New Dubai, The Kempinski Hotel with its 393 rooms has views of one of Dubai’s most elaborate new attractions: Ski Dubai – the world’s largest indoor snow park. Hotel guests are able to access Ski Dubai and the swanky shops in the adjacent Mall of the Emirates, directly from the hotel’s lobby. It’s an amazing experience indeed, despite the fact that the established areas might be flights of fancy, the rooms, albeit, are generally firmly grounded. All of them are warmly illuminated refuges, with smooth wooden floors, stream-lined contemporary furniture, commodious marble baths with bidets, and separate showers along with double vanities. The hotel possesses three main restaurants, although the most desired, is the mighty 935 seat, Sezzam, whose menu is arranged according to its cooking method, e.g. flame, steam, bake, rather than cuisine.

Insider Tip: Escape the mall onto the rooftop, where the open-air Mosaic Bar extends into the swimming pool area, and overlooks the Jumeirah’s myriad skyline.

The Room to Book: Try one of the 15 “ski chalets”, with their beamed wooden ceilings and European chalet décor. One bedroom chalets overlook Ski Dubai’s indoor slopes, but two & three bedroom chalet suites have both slope-side & city skyline views.

A kind of Arabian fantasy, designed to look like an authentic palace, and situated in a first-rate Dubai position.

This group of buildings – all containing sand-stone arches, gleaming columns and exquisite tiling covered by a charming decorated dome, and reflected by a shimmering pool – is positioned directly on Jumeirah Beach. It is encompassed by Sixty-five acres of lavish gardens. The hotel includes two main parts: The Palace, with 246 units, and the Arabian Court, containing 172 units; both these sections have suites and rooms which are plush, (if rather European in style), with private terraces or balconies overlooking the sea and pretty landscaped gardens. There is also the more exclusive 50-room resort-within-a-resort, The Residence & Spa, which contains its own reception, private dining room and bar, and the hotels is decorated with curved and inlaid wood, elaborate tiling and silky, embroidered fabrics. Its eight restaurants range from Moroccan to Asian, and Mediterranean to casual beachside seafood. However, whenever you should eat, ensure you hit The Rooftop lounge, at the Arabian Court for pre-or-post-dinner cocktails, to enjoy the view overlooking Palm Island Bay.

Insider Tip: Book “The Royal Treatment” at the Oriental Hammam, during which you will be laid out on a heated marble table for your honey facial, body scrub, and massage.

The Room to Book: The four rooms located within the Residence glance over perfumed gardens, and feature private terraces for dining and sunbathing.

Compared to Dubai’s huge skyscraper hotels, the waterfront situated, Park Hyatt Dubai, which opened its doors in 2005, is subtle and diminutive – and this is exactly the point. While close to the heart of the city, the 225-room, bright-white compound, sits on a quiet stretch of Dubai Creek, secluded from the streets by acres of gardens, with a stunning and silent view of Dubai’s skyline. Its Mediterranean-influenced design subdues the city’s energy, using low archways and an intimate candle-lit lobby, more of a sanctuary than a public waiting area. The serenity extends to its rooms, with angular wooden furniture, silky furnishing in gold and cream colours, sculptured objects, free-standing baths, and either balconies or terraces with panoramic views over the creek. At the Amara spa, each of the eight treatment rooms has its own beautiful private enclosed garden.

Insider Tip: As a self-indulgent night in for two, choose from an exceptional room service menu where you are able to indulge in a moonlit picnic of local sweet delicacies, mezze, wine and champagne, all from your balcony or terrace.

The Room to Book: Choose the Park Terrace Suites which have separate work and living areas, and outdoor living rooms which look out over the lawned gardens.

The Culture and History of Ras Al Khaimah

The top 10 most affordable luxury hotels in Abu Dhabi